The great director John Ford tries to atone for the White Man's genocidal treatment of the American indian all in one movie, this his last western. The success is a mixed bag. It's the true story of a dwindled Cheyenne tribe who want to make the 1500 mile trek back to their homeland after they were unfairly displaced (and forgotten) on a barren desert reservation. Elegiac and sincere, the intention should be lauded, but the movie trips up when we're often identifying with Richard Widmark as the calvary officer who's sent to retrieve these 'savages' and his love interest, Carroll Baker, a Quaker schoolmarm of the Cheyenne children who's along for the ride. If you can get past Ricardo Montalban(!) and Sal Mineo as hot-headed tribal warriors then you can glory in the stunning, panoramic visuals of Ford's favorite set, Utah's Monument Valley. Filmed in breathtaking Technicolor Panovision (the man can't frame an ugly shot), try to see this in widescreen format. 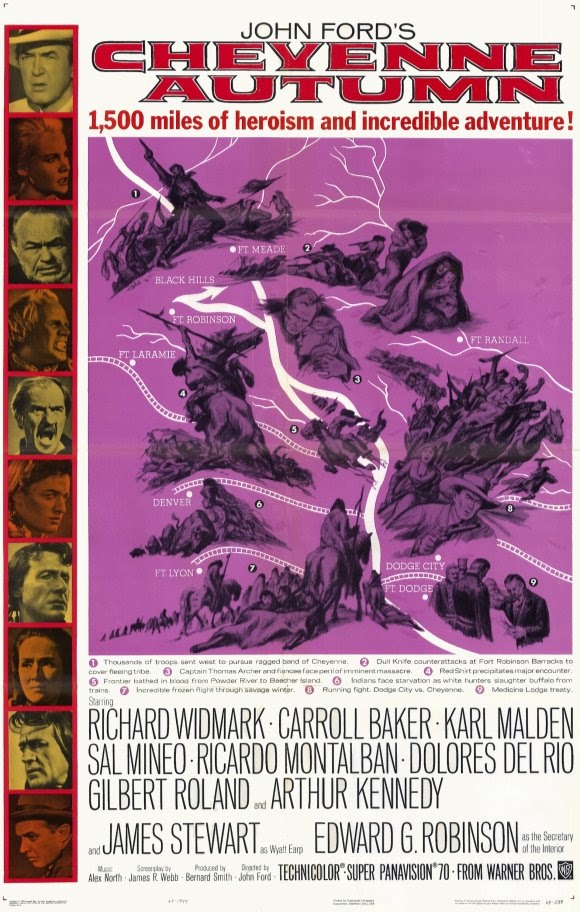 Posted by roncastillonyc@yahoo.com at 6:59 AM