In the 1930's, no studio owned the gangster genre like Warner Brothers. This is one of the best. In a crime ridden NYC, everyone is on the make or on the take. Edward G. Robinson is a career detective who goes undercover within the mob to take down the biggest racketeering ring in the city. He runs up against a skeptical Humphrey Bogart, who's character is loosely based on "Dutch" Schultz, and a then-svelt Joan Blondell plays his numbers running girlfriend. A fast-paced story told with machine guns and spinning headlines all on the studio backlot. 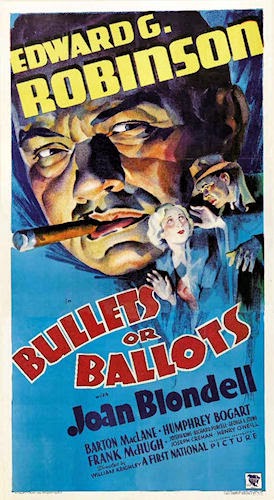 Posted by roncastillonyc@yahoo.com at 6:26 PM