This is not the telekinetic frightfest of the '70s but a very fine adaptation of Theodore Dreiser's turn-of-the-century novel "Sister Carrie", starring Jennifer Jones as the put-upon title character and Laurence Olivier in a master class of heartbreakingly restrained acting. She's a midwestern farmgirl who finds nothing but tribulations when she moves to the big city. When she falls for Olivier, the manager of a plush restaurant, things start looking up but there's one big problem: he's married to über-bitch Miriam Hopkins and she's not letting him go that easy. This being Dreiser material it's not only depressing, it's slit-your-wrists-stick-your-head-in-the-oven bleakness. It's all saved from teetering into soapland by that canny old pro, director William Wyler. There's not a false note in the perfect storytelling and period detail, plus there's David Raksin's moltenly beautiful score. 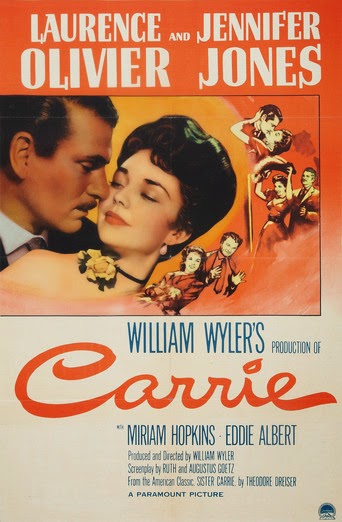 Posted by roncastillonyc@yahoo.com at 4:11 PM