John Steinbeck had a great idea for a novel, tell a modern day version of the Book of Genesis. But his plot is meandering and repetitive, there's not one but two sets of Cain and Abel! This big screen adaptation only tells the last third of the tome, probably a wise choice as it's the most plot heavy, and best part. The film is best remembered as a showcase for actor James Dean. This was his movie debut and with it he shot into the zeitgeist like a Roman candle. His emotive, raw nerve acting style was such a departure from the norm that he became the embodiment of Misunderstood Youth, a social phenomenon that would only snowball as the decade progressed into the 1960's. Today his mumbling and body contortioning seems mannered but you do end up feeling for his love-starved character, a young man who is destined to destroy his twin brother (sorry if you haven't kept up with your Bible and that's a spoiler). Raymond Massey is the stern Adam/father and Jo Van Fleet is the Eve/fallen mother who walked away with the Oscar for her coiled sinister performance. Director Elia Kazan tries some baroque camera techniques to convey the family's unbalanced dynamic; it's not always successful. But it's Dean that's the draw here, you can't take your eyes off him. It's a fleeting glimpse of what would become a Hollywood icon in just three films before his life was cut short in a tragic death. 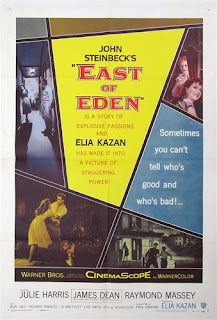 Posted by roncastillonyc@yahoo.com at 3:33 PM