Olivia de Havilland goes for broke in her Oscar nominated performance as a beleaguered woman suffering a nervous breakdown and enduring lockup in a mental hospital. It probably can't be stated how shocking this picture's inside look at life in a looney bin must have been for audiences of that time. Given this was a Hollywood depiction, it was probably sanitized somewhat, but it's still a disturbing peek into the daily hell of being surrounded with crying, screeching, gibbering, unpredictable patients. De Havilland eschews any pretense of looking like a star here, stripped of makeup, frowzy and disheveled, she does a fine job of showing us a personality disorder where everyday is lived on the knife edge between normalcy and insanity. If the therapy and 'solution' to her psychological problem are a little too pat (she's helped by a kindhearted doctor, Leo Genn), chalk that up to the film being a primer on mental help therapies for the uninitiated viewer. Director Anatole Litvak does an admirable job of juggling the soap opera and horror elements, bringing it all home to a satisfying note of closure and heart. 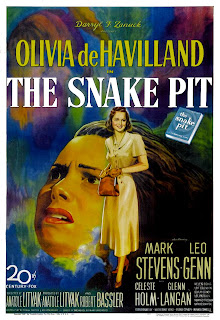 Posted by roncastillonyc@yahoo.com at 12:49 PM