By the end of the 1940's it seemed the country was world weary of World War II movies. But this story of one squadron during the Battle of the Bulge, based on the real 101st Airborne Division, was a huge success. It was probably because it eschewed the rah-rah boosterism of all the films made during the war, the ones that tried, successfully, to show why we were fighting and gosh-darn-it that we could win. A new spin on the war picture was needed. So director William Wellman and Oscar winner for Best Screenplay, Robert Pirosh, instead chose to depict the daily soul-sapping grind of the lives of the soldiers. The inedible food, the sleepless nights, the fierce cold and frostbite (it takes place in the harsh winter of 1944-45 in the French countryside), and the psychological toll of knowing you could die any moment, are all vividly brought to life by an all-star cast of great actors. Van Johnson, John Hodiak, Ricardo Montalban, James Whitmore, Leon Ames, Richard Jaeckel, all get moments to shine. Yes, there's still a bit of the cliché melting pot idea here that was so prevalent in many WWII flicks, you know, all the American archetypes pulling together to vanquish The Evil Enemy, but here it doesn't seem forced. The film has a nice documentary feel too as it follows the men on their grueling cross country trek. It helps that some actual footage of the battle is interspersed to nice effect. 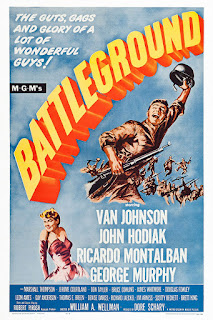 Posted by roncastillonyc@yahoo.com at 3:47 PM