In the early 1940's Oscar Hammerstein took Bizet's celebrated opera "Carmen" and adapted it for the Broadway stage, shifting it to modern times and using an all black cast. It took Hollywood over a decade to bring it to the screen. This is a faithful, Technicolor version. While it's great to see a bigscreen "A" picture about people of color, especially considering when it was released, Hammerstein's lyrics are a tad icky, using a white man's take on black patois, songs like "Dat's Love", "Dere's a Café on the Corner", "De Cards Don' Lie", etc. That aside, there's no denying the power of those timeless tunes. What's better is the grand larceny Dorothy Dandridge gets away with here. She steals the entire movie, as she rightly should in one of the great femme fatale roles of all time. Carmen is sexy, flirty, wily, opportunistic, and downright mean, sometimes all at once. But Dandridge, seductively decked out in tight skirts, peasant blouses, and gypsy hoop earrings, is such a refreshing one-eighty from all those servant roles we had seen black women playing for decades, you can't help but be captivated. No wonder her love interest, here played by an earnest, if slightly bland, Harry Belafonte, falls for her heavily. What a tragedy that this gifted actress went on to so few other starring parts (and a too early demise). Other standouts: a dynamic Pearl Bailey in the second female lead as Carmen's best friend, belting out a big band number along with a young Diahann Carroll as her cohort. And if you're a fan of great title sequences,  this is the first of many by the groundbreaking Saul Bass, it's graphic, simple, and elegant. 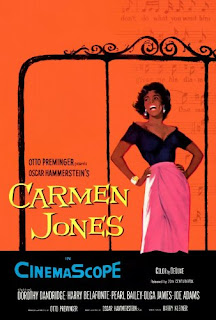 Posted by roncastillonyc@yahoo.com at 11:39 AM