A great example of the best kind of film noir: simple tight plot, quick smart dialog, edgy suspense and a twisty plot all set amid a gritty urban setting. Ann Sheridan, looking like the love child of Lucille Ball and Talullah Bankhead, is the title dame. Her estranged husband  (Ross Elliot) witnesses a mob killing and goes on the lam for fear he'll be the next mark for what he saw. She tries to find him while the cops tail her, they need his testimony. There's also a handsome reporter in tow (Dennis O'Keefe) trying to bag the big story, plus the real killer. No wonder she's on the run! But the best reason to see the picture, hands down, is the fantastic use of real locations. The film has Sheridan traipsing all around San Francisco, up and down the hills, around famous landmarks, and thru the crowded streets and throngs. It's a perfect visualization of that city at mid-century. If you love The City by the Bay, take a stroll thru a bygone tour of the way it looked back then in superb black and white, a snapshot that surely no longer exists. 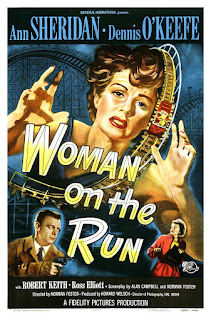 Posted by roncastillonyc@yahoo.com at 3:51 PM