This amiable film adaptation of William Inge's successful play was turned into a star vehicle for Marilyn Monroe at the height of her popularity. It proved that under all that cleavage and peroxide there really was an actress of some talent. Nevermind that her insecurities and demons made her a difficult handful while filming and that the performance was created in the editing room. The proof is on the screen. Her undeniable star presence is in full throttle. She's a self described 'chanteuse' playing in rowdy Southwest saloons working her way cross country to that big break in Hollywood. She collides with a  bumpkin bronco rider from Montana in town for the big rodeo (Don Murray, who manages not to make a fool of himself given he does a lot of whooping and hollering). For this cowboy it's love at first sight; for her, not so much. The second half of the film is set in the stagebound title location where they (of course) resolve their differences and ride off into the sunset, albeit on a bus. The notable thing about Monroe's performance here is that she's working a convincing accent vastly different from her usual breathy, ditzy delivery. It's clearly patterned on the great Kim Stanley who created the role on Broadway. You can hear Stanley's slurry, drawling cadences in Monroe's mimicking. Grand larceny that works. Rounding out the cast are two dependable character actors as the sparring couple's best friends, Arthur O'Connell as Murray's ranchhand cohort and Eileen Heckart as Monroe's waitress pal. The widescreen direction is by Josh Logan. 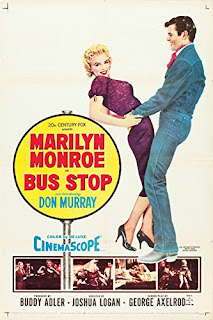 Posted by roncastillonyc@yahoo.com at 1:05 PM