There's an old axiom in storytelling: the better the villain, the better the tale. This fascinating little noir has a doozy of a femme fatale at it's core. Played by the raspy voiced Lizabeth Scott, it involves a restless woman stuck in a lackluster marriage to husband Arthur Kennedy. Quite by happenstance they find a satchel of money, so much money that they figure it can only be ill gotten gains. Sure enough the lowlife who's missing his cash, Dan Duryea, shows up and he's not happy. The plot only gets more twisted and tangled (and deadly) from there. Scott and Duryea were mainstays of the genre and they make the backstabbing and double-dealing look easy. Add to the intrigue an old friend of Kennedy's (Don Defore) who may or may not be what he seems and you've got a nifty grab bag of murder and mayhem. 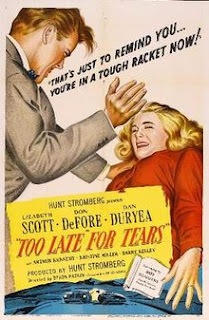