If you're one to believe the scandalous tell-all book "Mommie Dearest", the one where daughter Christina Crawford completely trashes the life, career, and memory of her beloved screen icon mother Joan Crawford, then this is the movie for you. Joan's character here comes closest to the frightening gorgon depicted in that hatchet job and the subsequent camp-fest film adaptation starring the go-for-broke performance by Faye Dunaway. She's an overbearing domestic control freak living in the suburbs. Her only motivation is to have a spotless house and perfect marriage, no matter the cost. If she has to double-cross her devoted cousin (a sincere K.T.Stevens), terrorize her housekeepers (Viola Roache, Ellen "Grandma Walton" Corby), or deviously manipulate her unsuspecting husband (Wendall Corey), so be it. It's the appearance of the ideal upper middle class life she craves and, goddamit, she'll stop at nothing to get it. Crawford is fascinating to watch, never shying away from being totally unsympathetic. You hate this harridan but you can't stop watching, wondering what jaw-dropping shenanigan she'll pull next. This is melodrama served up piping hot with a healthy side of kitsch to boot. Like Crawford's wardrobe, so gawdawful they look like rejects from a  Charles Busch show. Crawford's roles in the 1950's would get increasingly campier as her looks hardened, the eyebrows and cheekbones getting sharper and more brittle. Was it the best Hollywood could offer an aging star at that time? Who knows. But Crawford sunk her teeth into whatever she was given and she owned the screen whatever the vehicle. 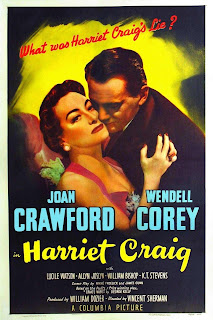