This is a more straightforward oater in the Clint Eastwood oeuvre. Sandwiched in between the groundbreaking 'spaghetti westerns' he did with director Sergio Leone and the more experimental genre-bending ones he made in the 1970's like "The Beguiled" and "High Plains Drifter", it feels more like an amped up TV show, "Rawhide" with more sex and violence. Maybe that's because it's directed by a television veteran, Ted Post. That's okay; you can get past the conventional look and feel of it because the story is a grabber. Eastwood is an Oklahoma territory cattleman who survives a trumped up lynching by a gang of nine disreputable ranchers led by nasty Ed Begley. They think he's a rustler.  Big mistake. He becomes a marshal and proceeds to track them down one by one and bring them to justice before trial judge Pat Hingle (who's terrific here). Lovely Inger Stevens is on hand to add some love interest and so is Arlene "Mayberry RFD" Golanka as a cheap harlot with a bad red wig. 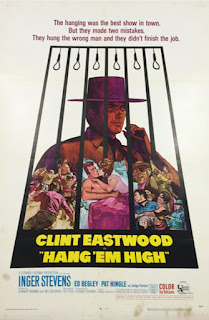 Posted by roncastillonyc@yahoo.com at 8:25 PM