True fact: the national emergency call number 911 was not fully adopted across the country until the late 1960's. Until then, various numbers were used regionally, hence the title of this tight, suspenseful little noir. And there's an emergency alright: an escaped mental patient (Marshall Thompson) goes on a murder spree and finally holes up in a late night bar taking a few hostages at gunpoint. The story cross cuts between the lunatic's tormenting of these character types, learning their backstories (a washed up reporter, a prim single gal on a date with an older man, the gin-soaked floozy barfly, etc), and the cops out on the street trying to form a game plan to rescue the bunch. The film is notable for a couple of prescient observations. There's a big hulking contraption up in the corner, one of those new-fangled televisions, and the people trapped inside get to see their predicament played out on the local news in real time, a canny prediction of media circuses to come. There's also some dramatic friction with the main homicide detective and a criminal psychologist about how to deal with this loony. Again, this was way before 'profilers' and 'mindhunters' became everyday catchphrases. Look for two fun cameos also. TV's "Cannon", William Conrad, is the easygoing barkeep and Beaver Cleaver's pearl-clad mom, Barbara Billingsly, has a few deft lines as newspaper secretary. 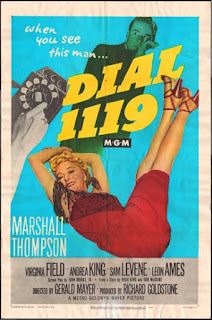 Posted by roncastillonyc@yahoo.com at 7:28 PM