Hollywood historians often name this the first independent movie, one made outside the traditional studio system of the day. It was a huge success, maybe because it zigged while all the big films zagged. Instead of a Technicolor/Cinerama/Vistavision extravaganza, which conventional thought said "give 'em what they can't get at home on their TV", this small story went into the belly of the beast. It was a adaptation of a teleplay already aired on the small screen. Paddy Chafesky re-tooled his own work and turned out a very affecting and simple story of a lonely Bronx butcher (Ernest Borgnine) looking for love and finding it in a fellow LonelyHeart (Betsy Blair). More than just a character study, it now serves as a window into how stifling society norms used to be concerning age, singlehood, dating, and marriage. Maybe the most shocking is the out-and-out body shaming that goes on here. The two leads are constantly referring to themselves as "dogs", "fat", "plain", etc. Fun times. That said, you'll find lots of feels here. Manipulative? You betcha. But sometimes an ugly cry can be pretty too. 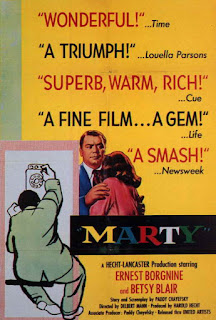 Posted by roncastillonyc@yahoo.com at 9:51 AM