A surprisingly terrific film noir set in the unlike milieu of --wait for it--produce truckers in rural California. Yes, before you start throwing tomatoes give it a chance. Director Jules Dassin gives the proceedings an almost documentary feel, as he did with "The Naked City" the year before. It's greasy, gritty and ultimately makes you glad you're not the poor soul driving all those nighttime lonely hours fighting fatigue and insomnia. Richard Conte is a vet returning home to find his father, a trucker himself, was swindled by an unscrupulous wholesaler (Lee J. Cobb). He sets out on the road to avenge the wrongdoing with a truckload of apples in tow. Along the way there are near scrapes and seedy characters with big dollops of suspense thrown in for good measure. Valentina Cortesa shows up as the hooker who might be working for Cobb. He plays the baddie with the Smarm-O-Meter turned up to 11. Was there anybody better at playing loudmouthed menacing louts? This a forgotten gem that shows just how much storytelling elasticity there is in this fascinating genre. 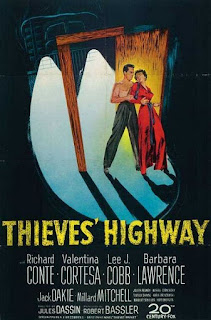 Posted by roncastillonyc@yahoo.com at 5:17 PM