One of the constantly recurring tropes of film noir is the heartless femme fatale. In this twisted little film Jean Simmons (nicely playing against her usual good girl casting) is one of the sickest gals ever depicted in the genre. Right up there with Gene Tierney in "Leave Her To Heaven", Barbara Stanwyck in "Double Indemnity", and Jane Greer in "Out of the Past". Simmons is so wacko in this one she creates a constant sense of dread, of "what the hell is she gonna try and pull off now??" She plays a spoiled young L.A. heiress who sets her sites on Robert Mitchum, playing one of his working class dumb EveryGuys, an ambulance driver just barely getting by. You really can't figure out exactly what motivates Simmons' character here, she's just an embodiment of cunning feminine wiles, which probably made it scary viewing in the early 1950's. Pretty young ladies just didn't act this way. Director Otto Preminger keeps things moving apace, he knew his way around noir, see "Laura" for instance. And Dimitri Tiomkin's lush and sinister score adds the right amount of unsettlingness to the proceedings. But the real reason to give this one a try is not one, but two what-the-f**k murders that leave you gobsmacked. Like, "did that just happen?" moments that leave you reeling. You were warned. Take a spin into this dark tale, you won't regret it. 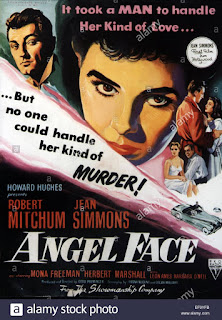 Posted by roncastillonyc@yahoo.com at 12:37 PM