In hindsight , Gregory Peck would often say that he was miscast as the mentally tormented protagonist Captain Ahab in this adaption of Herman Melville's Great American Novel, "Moby-Dick". Yes, he's much younger than the wizened seafarer of the book whose mono-maniacal obsession with killing a certain white whale brings on his own downfall, but Peck does good service to the role here. Maybe it's his constant flinty and squinty appearance, or his wonderful basso profundo voice barking out orders to the beleaguered crew on his ill-fated ship, the Peqoud, but he brings just the right amount of steely resolve and crazy to the part. Director John Huston, who co-wrote the script with science fiction writer Ray Bradbury, sticks fairly closely to the source material's plot. If you've read the book you know that's not saying much. The book is mostly an encyclopedic treatise on whales and the whaling industry of the mid-19th Century; Ahab's quest is the spine of the story but almost ancillary. Huston does an interesting treatment with the look of the film. He's de-saturated the colors to toasty sepias, charcoal grays, and cold ocean blues. It's like looking at old daguerreotypes come alive and it was done years before this kind of 'color grading' became popular in modern Hollywood films. And what about that whale, you ask? Remember, this was WAY before the proliferation of CGI special effects, so given that , ol' Moby doesn't look too shabby. Compare it to the more sophisticated whale effects of the more recent Ron Howard film "In the Heart of the Sea", the story of a whaling vessel that inspired Melville's tale, and you'll see the verisimilitude of the big fish holds up just fine. 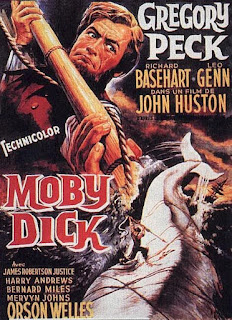 Posted by roncastillonyc@yahoo.com at 1:40 PM