Charlton Heston had a career renaissance in the late 1960's and early '70's starring in a number of dystopian science fiction films, unsettling and cautionary depictions of our planet's future where man's meddling has turned things rather ugly. This one has a quasi-noir feel. He's a police detective assigned to the murder of a very wealthy corporate bigwig (Joseph Cotten), who's on the board of a food manufacturing conglomerate. They make a foodstuff that looks like flat crackers, red, yellow, and their brand new offering, green! It's essentially the only affordable edible around and the dirty huddled masses have to fight and clamor for just a few squares of it. Cotten was going public with Big Dirty Secrets about this stuff. Why was he killed? The answer is one of the great reveals in movie history and it's worth getting to the last reel to find out what's what. Heston is serviceable, he made a career of being the tight-jawed hero, gritting out his lines; the real scene-stealer here is irascible Edward G. Robinson in his last film (his 101st!), as Heston's researcher and buddy roommate. He has an affecting scene where he decides to leave this crappy world but not before one last moment of beauty. There's one harrowing set piece where the cops have to take bulldozers to the rioting hordes who are literally dying for their Soylent, pretty scary. And a chilling opening montage that only takes a few minutes to show how we've royally screwed a planet that took eons to build. But there's no such thing as man-made climate change, right? 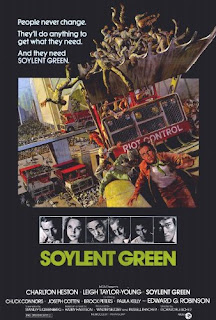 Posted by roncastillonyc@yahoo.com at 6:21 PM