This is one of those good news/bad news movies. THE GOOD: it was Jimmy Stewart's first western, a genre he would later do great things with all during the 1950's, especially the five terrific pictures he would make with director Anthony Mann (yes, he did make "Destry Rides Again" in 1939 but that was more of a romantic comedy than a real western, just saying). Apache raids are hindering railroad travel thru the Arizona territory and Stewart is the emissary sent in to create an armistice between the Indians and the US Army. Sincere pains are taken here to depict the Apaches as human beings who are rebelling at their lands being stolen, not vicious savages as was Hollywood's usual custom. Stewart even falls in love with one of the beautiful squaws, whoa, interracial romance! But that leads us to THE BAD: the two biggest Apaches roles are filled by white actors (cue the sad trombone). Oscar nominated Jeff Chandler and lovely Debra Paget play Cochise, the noble Apache leader, and the maiden love interest. They both do an adequate job under a lot of dark pancake makeup...but really? It's easy to poke fun at a 70 year old movie's best intentions, so let's just chalk it up to "at least they were trying". All that said, Stewart is more than fine as the peacemaker trying to make both sides come together, even if he is a bit too old for Paget. The older man/younger female co-star issue is still, sadly, haunting us to this day. 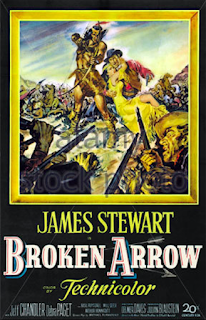 Posted by roncastillonyc@yahoo.com at 5:25 PM