This British anthology film now looks like it could have been the inspiration for TV's "Twilight Zone." A collection of five tales of the supernatural ranging in tone from eerie, to comical, to downright terryfying. They're all connected but to say how will only spoil the fun of the eerie denouement. The clear standout story is the justifiably famous one with Michael Redgrave as a ventriloquist with a creepy relationship with his dummy. His wooden friend, Hugo, is the forerunner to all those cinematic devil dolls that have haunted us for years, the "Poltergeist" clown under the bed, Karen Black's native figurine in "Trilogy of Terror", and that evil scamp Chucky. But this dummy is no dummy, and he'll haunt your dreams for quite a while.  You just might believe that a leering piece of wood and cloth could really be responsible for murder. Don't watch this one with the lights out. 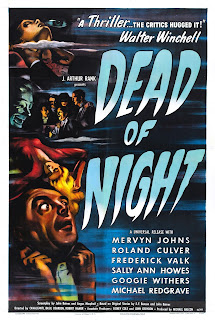 Posted by roncastillonyc@yahoo.com at 5:21 PM