This serviceable musical was Doris Day's followup effort the year following her smash hit "Calamity Jane". It bombed. On paper it should have worked: same studio, same songwriters, great supporting cast, likable leading man. But the shopworn backstage story and ho-hum songs make make it almost forgettable, emphasis on almost. The saving grace, of course, is the indomitable gale force skill of Ms. Day. The woman didn't have a disingenuous acting bone in her body. She believes in the hokey script and bland lyrics, or at least she makes you think she does. She rises so far above the dross material that she single-handedly pulls it across the finish line. And that's called talent, folks. 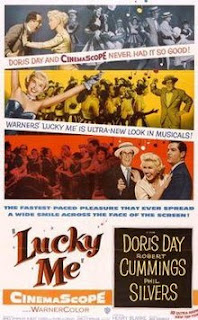 Posted by roncastillonyc@yahoo.com at 5:24 PM