The marketing wizards of Hollywood chose to sell this Depression era crime story as a another "Bonne & Clyde". Big mistake. Yes, both are about a young, madly in love bank robbing couple making headlines and fleeing the authorities, but that's where the similarities end. The former was a statement about the intersection of violence, sex, and celebrity in American culture, told with glamorous stars, a whipcrack smart script, and groundbreaking editing. This Robert Altman piece is 180 degrees from that, trying for something completely different. The director has chosen instead to create a visual tone poem, a languid depiction of the simpler, less frenzied life in 1930's rural America. The bank robberies are almost an afterthought. They're shot from afar or not at all, we just see the escape. The movie is long and deliberately paced. Small moments stand out: a game of catch, a Sunday dinner, a sensous bath. And it's the two lovers we remember most. Keith Carradine and Shelley Duval are so perfectly matched. Two beanpoles with big teeth and eyes. Sweet and laconic, sipping Cokes and finding a doomed love that will stick with you well after the story's over. 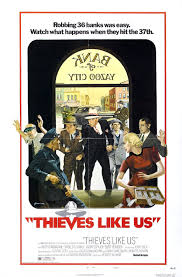 Posted by roncastillonyc@yahoo.com at 4:59 PM