This could very well be the definitive adaption of Charles Dickens' beloved novel about an orphan waif falling into a band of young boy pickpockets in Victorian London. Director David Lean and his production artists create the perfect atmosphere of the dark, dirty, oppressive city during the Industrial Revolution. Given the year it was made, post WWII, and still building it's way out of the bombing devastation, it's no wonder Lean paints the location in inky noir blacks and shadows to parallel the recent history. Cities can be dog-eat-dog urban jungles no matter the period. Now, when discussing this story, the knottiest problem is always going to be the infamous character of Fagin, the stolen goods fence who's the caretaker for the street urchins. In the book there's no getting around the anti-Semitism of the characterization (he's called "the Jew" over 300 times). The film excises this terminology but still portrays him (by an unrecognizable Alec Guinnass), as a filthy and miserly villain with a nose so big he looks like a toucan. The insinuation is still queasily there. But the rest of the cast is perfect, embodying the Dickensian gallery of characters that runs the gamut from comedic to nefarious. As little Oliver, John Howard Davies hits just the right note of innocence and defiance. And look for a teenage Anthony Newley as the rapscallion Artful Dodger! 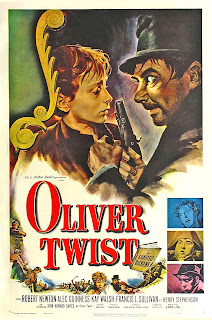 Posted by roncastillonyc@yahoo.com at 3:58 PM