Ah, the myriad guilty pleasures to be had from that tried-and-true sub-genre of thrillers, the commercial jetliner disaster movie. Whether it's John Wayne having a nervous breakdown in the cockpit of "The High and the Mighty", or Doris Day as a wide-eyed stewardess having to land the plane herself in "Julie", or those matched set of over-the-top campfests the "Airport" movies of the 1970's, they're all the stuff of giddy unintentional humor. Add to the list this forgotten British number that is, plot line for plot line, an exact duplicate of the first "Airport" and pre-dates it by over 10 years! Richard Attenborough is an unhinged passenger on a transatlantic flight from London to New York carrying a booby-trap bomb device. He's mad at the world and he's gonna take down everyone on the plane with him. Of course, we get to know the variety of passengers and crew members along the way. How they deal with their possible demise and who gets to survive is the stuff of most of the movie. Along the way there's witty banter, flirtations, fisticuffs, and freak-outs. Perfect popcorn fair if you like this sort of thing. Especially noteworthy is Hermione Baddeley as a boorish nouvue riche widow, bulldozing her way over everyone in the plane. She's so deliciously hateful you wish they'd stick the bomb in her mouth just to shut her up. 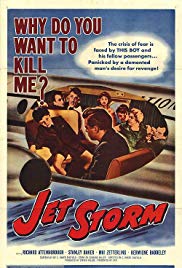 Posted by roncastillonyc@yahoo.com at 10:41 AM