A very faithful adaptation of George Orwell's famous dystopian novel. Director Michael Radford makes the very important decision to set the film in a 'future' from the vantage point of the period the book was written, the late 1940's. Therefore there's no ultra-sophisticated technology, about the only advanced gizmos around are the pervasive screens that encroach on everyone's lives everywhere you look. In hindsight this works to the advantage of the movie as it doesn't date it in the least. Here we are almost 35 years hence and the film still looks fresh. Credit cinematographer Roger Deakins for the moody, washed out look. The story is a cautionary allegory, the struggle of one man versus Power in all it's oppressive forms. John Hurt is perfect as the little man, Winston Smith, who can't stomach the dehumanizing tyranny of The State and who finds a modicum of solace in an furtive love affair with a fellow co-worker (Suzanna Hamilton), and possible lifeline of help from yet another co-worker, a somber Richard Burton in what was to be his last film role. Fair warning, the plot turns truly horrific when we discover just how the government is going to bend Smith to it's will, the word torture doesn't even begin to describe it, so set your expectations accordingly. This is scary stuff. But what's even more frightening is just how prescient this tale is for our current nervous times. Couldn't 'Big Brother' be a stand-in for all the screens, the internet, and closed circuit cameras that fill our lives? Isn't 'Newspeak' just another word for 'Fake News with all it's Anternative Facts'? Even our endless involvement is far off wars is echoed in the relentless agitprop that's constantly fed the  brainwashed masses in Winston's world. Hell, maybe they should just re-release the thing and call it "2019". 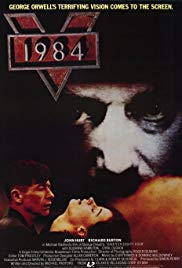 Posted by roncastillonyc@yahoo.com at 2:32 PM