There are at least ten(!) films noir from the genre's heyday, the 1940's and 50's, that contain the word 'Big' in the title, including a couple of the all-time classics, Howard Hawks' "The Big Sleep" and Fritz Lang's "The Big Heat". This lesser known entry on that list deserves its fair shoutout. First, it's helmed by cult director Joseph H. Lewis, the man responsible for two other films in the catgory that cineastes love to love, "Gun Crazy" and "My Name is Julia Ross". Lewis always brought a great visual style to anything he touched (there are some stunning compositions here, aided by cinematographer John Alton and his painterly black and white photography), but you sense his biggest contribution is what he does on the periphery of the story, subtle little touches to spice things up and, fascinatingly, to whiz by the authority of the censors. Cornel Wilde is a city police detective trying to nab an elusive mob boss, Richard Conte. Maybe he can get the goods on his quarry with the help of Conte's estranged girlfriend, Jean Wallace, with whom he starts to have feelings. Wilde is a little stiff here, one of those one-dimensional do-gooder cops you've seen a million times. That's where Conte sweeps in and steals the picture. He's one of the more hateful noir bad guys put on film, maybe because his controlled performance is so cold and emotionless, laying waste to anyone who gets in his way. Then there are his two henchmen, young actors here, Lee Van Cleef and Earl Holliman. There's no question Lewis sneaks in not-so-veiled cues to their gay relationship all over the place. Honestly, when two gunmen get the midnight call to rub out a mark, do they wake up together?? Case closed, I drop the mic. Finally, there's the "Wait, did I just see what I just saw?" moment when Conte orally pleasures Wallace. Yes, as in there's a cunnilingus scene in a 50's Hollywood movie, folks. Major props to Lewis for pulling that one off. Definitely an offbeat gem to seek out. 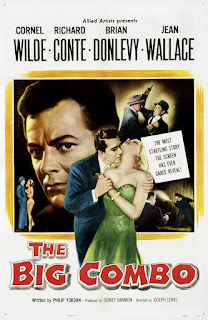 Posted by roncastillonyc@yahoo.com at 12:06 PM