20th Century Fox broke the bank on this epic disaster film and it shows. Adapted from a big popular bestseller by Louis Bromfield, it's a soapy melodrama about a bunch of wealthy white British colonials in the province of Ranchipur, India. They have no more pressing concerns than where to have their society teas and which race horse to buy. Lovely Myrna Loy has fun playing the ennui laden countess and wife to a blow-hard imperialist, Nigel "Dr. Watson" Bruce. Her old flame, George Brent, is a louche international playboy trying to parry the advances of a sex-starved debutante, Brenda Joyce. Of course, everyone gets their karmic comeuppance via the hand of God (or is it Brahma?) when the monsoon season hits. And boy, does it hit. You could read into the ensuing catastrophic floods that happen as a spiritual cleansing of all these meaningless lives and how they find personal redemption because of it, but let's face it, in a disaster picture you come to see the death and destruction and this movie delivers in spades. Not only do the rising waters lay waste to everything in sight, there's a big earthquake to boot. And if that's not enough a malaria plague afterwards! This was the first move to win an Oscar for visual effects and they're tremendous and downright scary. Folks, this was how it was done without the crutch of CGI. Dams burst, rivers overflow, thousands of extras meet their doom...harrowing stuff. Loy has a touching romance with the one upstanding Indian character, a noble surgeon, but he's played by...Tyrone Power?? Ugh. Hollywood whitewashing strikes again. The only saving grace was that Power was at the height of male pulchritudinous and he's lit here in his dark pancake makeup and turbans like a Hurell photograph, and he never looked more scrumptious. 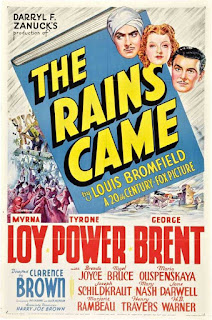 Posted by roncastillonyc@yahoo.com at 10:02 AM