Actress Ida Lupino knew her way around a film noir picture. She was always terrific playing the hard-bitten dame. So it's no surprise when she went behind the camera to direct (a rarity in itself for Old Hollywood), she spun gold out of the genre in this first-rate economical thriller. "Ripped from the headlines", this is based on the real story of a serial killer hitchhiker in Southern California who'd gun down his unsuspecting victims, steal their money and make off with their vehicle. (Did movies make hitching so scary...or was it always such a terrifying thing?) The bad boogeyman in this scenario is a doozy. Played by William Talman this dude is creepy personified, right down to one eye that never closes, even when he's sleeping. He hitches a ride with two friends going on a fishing trip ( Edmund O'Brien and Frank Lovejoy). At gunpoint he forces them  to take him down to Baja California where he can make an escape from the nationwide manhunt on his tail. Afterward he'll presumably kill them both. Lupino juxtaposes the claustrophobic interior of the car with the desolate desert roads, so empty and rocky they look like an alien planet. With no help in sight the victims are doomed. There's a dragnet that ensues with the Mexican police but will they find them in time? Adding to the suspense is an extra layer of storytelling that gives the story even more emotional resonance: there's a decided gay subtext to the relationship between the two gentlemen friends. The 'fishing trip' excuse is thin, a pre-"Brokeback Mountain" cover if there ever was one. And there are too many subtle body language cues--knees touching, arms gently draped over shoulders--for their solicitous gestures to mean anything less. Since Lupino was co-screen writer it's clear what she was aiming for and the hitcher only adds to the sexual tension. Polanski would create the same kind of sexy pressure cooker ten years later with three travelers on a boat in his "Knife in the Water". 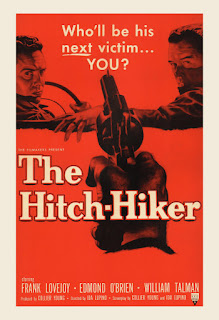 Posted by roncastillonyc@yahoo.com at 10:44 PM