In his best film noir roles, like"Laura" and "Fallen Angel",  actor Dana Andrews was expert at conveying a world-weary melancholy, a lonely man trying to hold onto his values in a sinister world. He brings that same attitude to this nicely plotted western. He's a gunslinger hired by the railroad to protect it's interests. One fateful night he awakens from a blackout with a pistol in hand standing over a dead body, his fiance's possessive brother. The town is quick to lynch him up right away but he escapes. And the rest of the picture turns into a quasi whodunnit as he sleuths his way to finding the real killer. Is it the town barber? The saloon keeper? The local gambler? Or even his best friend? Donna Reed has little to do as his suffering girl but she brings a nice sincerity to her scenes, and she and Andrews create a nice depth to their tortured romance. 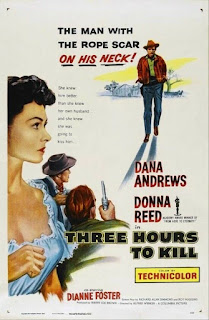 Posted by roncastillonyc@yahoo.com at 11:15 AM