You could think of this psychological suspenser  as "Gaslight" with a Cajun accent. Merle Oberon is the sole survivor of an ocean liner torpedoed by a German U Boat. Her parents were two of the casualties, so naturally she comes through her recovery in a highly fragile state. She decides to connect with her only surviving relatives, a long lost aunt and uncle (Fay Bainter and John Qualen) who live in a moss covered plantation deep in the back bayous of Louisiana. When she arrives there's something...not...quite...right. Her family is oddly detached, plus there's an off-putting boarder (Thomas Mitchell), and an overly forward caretaker (Elisha Cook, Jr.). Before you can say "crawfish etouffée" someone or something tries to drive Oberon crazy. Lights going on and off, spooky voices calling her name from the sinister bayous at night, etc. The only person who she can turn to is the local handsome doctor (Franchot Tone). Despite a few plot holes so big an alligator could crawl through them, the whole piece hangs together with a great sense of atmosphere and the game cast. Mitchell is having a ball playing against his normal jovial type, and Oberon's regal beauty is ravishing in the black and white noir lighting. A tasty cinematic gumbo. 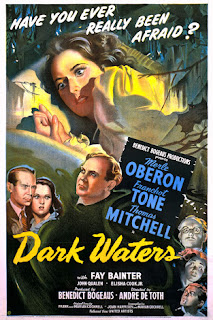 Posted by roncastillonyc@yahoo.com at 7:49 PM