A tight, intense thriller noir adapted from a novel by Graham Greene. This is a British production, so it's fun to see what they did with the genre's tenets across the pond. A young baby-faced Richard Attenborough is a streetwise gang member who kills a journalist in the seaside resort town of Brighton. The victim has a ladyfriend (Hermione Baddely, Mrs Naugatuck from TV's "Maude") who isn't buying the police's theory of suicide so she takes matters into her own hands. Attenborough gives a lean and menacing performance, this was years before all those angry young men that the British New Wave cinema gave us in the 1960's. He's ruthless in wooing a naive waitress (Carol Marsh) who, unbeknownst to her, can identify him as the killer. Will the amateur lady sleuth finger the hoodlum before he's found out by his girl? Therein lies the suspense. And it's a smartly plotted ride. Amazing and  gritty on-location photography provides loads of atmosphere to backdrop all the action. And a terrifically poignant ending to boot. 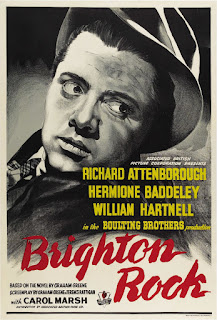 Posted by roncastillonyc@yahoo.com at 4:09 PM