You could say this was the last hoorah for the straight-ahead western, where the story was simple and the good guys always vanquished the bad. Made the same year as John Ford's landmark "Stagecoach", a film that would herald a new and more mature direction for the genre, this is a fine piece of studio entertainment, albeit one that's about as deep as a prairie dog mound. Helmed by Warner Brothers' ace director Michael Curtiz, it's at turns epic, rousing, and romantic. And jam packed with so much western stuff that afterward you'll feel like a sated cowpoke at a barbecue feast. The plot is simple, Errol Flynn (in his first western) is a hired gun cattleman enlisted by the town elders of the title burg to be the sheriff who cleans up all the lawlessness. If that sounds familiar it's because Mel Brooks borrowed the plot for his uproarious "Blazing Saddles". There are some spectacular set pieces of the kind Curtiz excelled at: an amazing race between a stagecoach and a locomotive, a no-holds-bared barroom brawl purportedly the longest in cinema history, and a white knuckle escape from yet another train on fire. Olivia de Havilland is on hand looking ravishing in prairie skirts as the love interest and local reporter trying to finger the town's bad man (Bruce Cabot), and things wouldn't be complete without the vampy saloon singer, the 'oomph girl' herself, Ann Sheridan. You can quibble with mid-Atlantic accents of Flynn and de Havilland. No denizens of the Old West talked like that, but who cares when you get their undeniable chemistry, this being the fifth of their eight(!) films together. 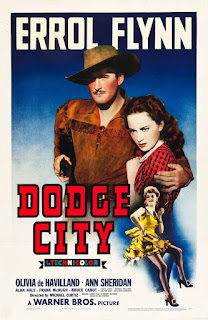 Posted by roncastillonyc@yahoo.com at 5:04 PM