Thomas Hardy's classic novel of the tragic life and loves of a 19th Century English milkmaid, "Tess of the D'Urbervilles", comes to the screen in this stately adaption by director Roman Polanski. The novel is still a vital part of the Western canon because it grapples with a couple of knotty themes that irk us to this day, namely the hypocrisy of religion and the grossly unfair gender roles society lays down for men and women. You won't find a more stunningly beautiful movie (it won a well-deserved Oscar for cinematography), and the production is uniformly faithful to the source material. In her movie debut, Nastassia Kinski--looking like a young Ingrid Bergman--does an admirable job in the title role. Not to damn with faint praise, but the picture is a nicely measured telling of the story. If you love the book, you'll admire the movie. So what's the catch? Well, it's one of those instances where you can't separate the art from the artist. Not Hardy, but Polanski. See, he made this movie only three years after having been notoriously banished from Hollywood (and America) for allegedly raping a thirteen year old girl. He fled to Europe and hasn't graced our shores since. And since this story directly hinges on the rape of the title heroine, a naive teenager,  by an older man (sorry for the spoiler but it happens early in the story), you have to question the director's motivations here, and it will alter your perception of the film. Is it a sincere apologia for his transgressions? A misguided rationalization? Or maybe just a big F.U. to all those who damned him? You decide. Depending on your viewpoint, it may or may not help that the ad campaign's tagline was "She was born into a world where they called it seduction, not rape." See what I mean? 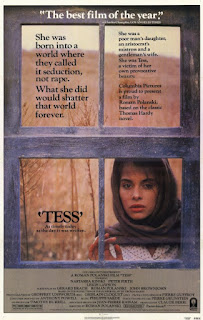 Posted by roncastillonyc@yahoo.com at 8:28 PM