Musical theatre aficionados rate this show as second tier Rodgers and Hammerstein, not in the same artistic league as the famed composer/lyricist team's more celebrated Big Five: "Oklahoma!", "Carousel", "The King and I", "South Pacific", and "The Sound of Music". That said, even lesser R&H works are better than most, and this screen adaptation has much to recommend. It's the story of the clashing cultural values of first and second generation Chinese families in San Francisco's Chinatown and the resulting romantic rondelay of two intertwined sets of lovers. There are a couple of nettlesome caveats however. Of the four lead actors (Nancy Kwan, Miyoshi Umeki, James Shigeta, and Jack Soo), three are of Japanese descent, Kwan being Chinese/British.  Makes you think studio executives were using the abhorrent "they all look alike" excuse when casting. Does it affect the viewing of the film? Ish. But this was 60 years ago and we can't forget how groundbreaking it was to see a major Hollywood film showcasing an all Asian cast. Hell, it's still groundbreaking today (see the welcome success of "Crazy Rich Asians"), so it's a lump you have to accept to watch the film. There are also some groaner bits of dialog ("The old man had egg foo young on his face.")...really? But now the good stuff. Nancy Kwan is electric. It's criminal that she didn't go on to other leading roles. She's smart, sexy, and she slays any scene she's in. She had a dancing background so she aces her big musical numbers ("Grant Avenue" and "Fan Tan Fannie") and her leggy prancing and preening in the show's most famous song "I Enjoy Being a Girl" is scrumptious, making this number a drag show warhorse for the next fifty years. The whole production was shot on sets, even big San Francisco street scenes, so there's a stylized theatre-like quality to everything like many comedies and musicals of that era. Reliable director Henry Koster did the direction and Irene Sharaff works wonders doing umpteen variations on the cheongsam dress, but perhaps the best production touch is the snazzy, jazzy choreography by Hermes Pan, it adds a youthful modern touch to the proceedings. 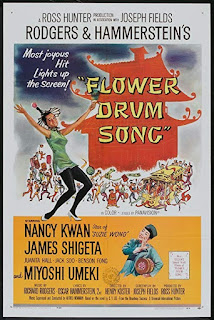 Posted by roncastillonyc@yahoo.com at 10:34 PM