One of those small-ish and British film noir pictures from the 1940's that shows Hollywood didn't have a monopoly on the shadowy dark currents of the genre. This one is conspicuous for its decidedly Hitchcockian feel, using one of The Master of Suspense's great themes, an innocent man wrongly accused of a crime he didn't commit who has to clear his name (see "The 39 Steps", "Saboteur", and "North by Northwest"). Trevor Howard is a former RAF pilot who falls in with a bad lot of black market racketeers in London. After a failed heist where a cop is killed, he gets blamed (wrongly) and is in hot pursuit by the authorities and his former gang members who want him dead. Along the way he gets the help from a sympathetic blonde (Sally Grey), channeling her best Linda Darnell/Lana Turner lusciousness, and romance ensues. There are some nice suspense set-pieces and a thrilling chase finale across the sooty rooftops of Londontown. Worth your time. 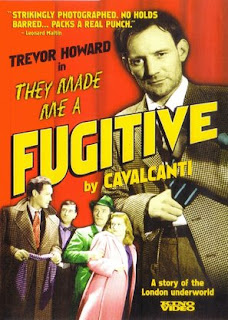 Posted by roncastillonyc@yahoo.com at 3:46 PM