The Grandmamma of all women's prison pictures. And if the mention of that phrase conjures up all the tropes of the genre, just ripe for parody and played for laughs, there's always a source for those cliches and "Caged" is it. But there's no humor here. This hard-edged and soul-stripping noir is very serious stuff. Eleanor Parker gives a sensational performance (she was justifiably Oscar nominated) as a meek little wife who's sent up for armed robbery as an accessory to her husband's two bit larceny. As the main credits close, so do the bars on her entry into the tough brutal world of a woman's penitentiary. And even tho she's got a champion in the prison's sympathetic warden (a surprisingly warm Agnes Moorehead), she's got to survive this ugly world and grapple with the biggest, baddest cell block guard of them all, Faith Emerson. Nasty, conniving, vindictive...this is the Queen Bitch you don't want to cross, but Parker does, and through the course of her struggle, she transforms before your eyes into a merciless hardened creature. Parker is so stunning it's a pity Hollywood never really knew how to harness her talents later in her career (no, Baroness Schrader in "The  Sound of Music" doesn't count). Warner Brothers and underrated director John Cromwell mount a first rate production and even infuse it with some cautionary messaging about our penal system that still applies today. 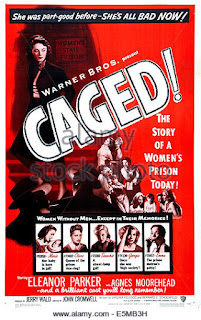 Posted by roncastillonyc@yahoo.com at 3:44 PM