What would an episode of TV's "Law & Order" look like if it were filmed in 1948? Probably something like this fine proto-policier. It's a pretty straightforward plot: a murder is committed right after the credits finish and a couple of New York City's finest detectives use standard legwork and deduction to track down and capture the culprit by the final reel. Two things distinguish it though. First, is the senior detective is not your standard matinee idol. Here he's short, dumpy, Irish-brogue character actor Barry Fitzgerald. It's odd (and refreshing) to see his star turn here. He's at times smug, irascible, and funny. He's aided by his younger tenderfoot partner (Don Taylor) who's basically around to be the pair of legs to chase the bad guy. The second outstanding feature is the direction and real life location shooting. Director Jules Dassin and Oscar winning cinematographer Billy Daniels broke with convention and shot large chunks of the action on the actual streets of the Big Apple, something practically unheard of at the time. Inspired by the Italian neo-realism pictures of the time, the gritty, grimy, photogenic city looks like a series of Weegee photographs in motion. Many of the later modern day film noirs owe a debt of gratitude to this picture. Classics like "The French Connection", "Serpico", and "Dog Day Afternoon", all captured the dirty kinetic energy of New York, but "The Naked City" did it first and wrote the book on how to do it. 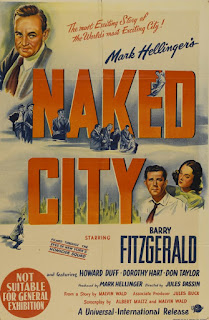 Posted by roncastillonyc@yahoo.com at 8:19 PM