This is one of those glorious big production MGM adaptations of a literary classic that they did so effortlessly back in the Golden Age of cinema. Rudyard Kipling's seafaring tale of a super rich spoiled brat who gets his comeuppance and learns big life lessons aboard a Portuguese fishing vessel is heartwarming without being cloying. Big credit goes to the actors. Spencer Tracy won the Academy Award for his earthy, kind hearted sailor, Manuel. His Iberian accent leaves a little to be desired but he's so genuine you forgive it. Freddie Bartholomew was second only to Shirley Temple as one of the great child actors. Here he's so hateful as the thoughtless Richie Rich kid that you wanna slug him, but watch his journey of self-discovery as he learns the value of hard work, friendship, honor, and respect for others. You believe the transformation. Melvyn Douglas and Lionel Barrymore are also on hand to round out the fine cast as Freddie's well-meaning but clueless father, and the ship's salty captain (was there ever a sea captain in the movies who wasn't salty?) Fine family fair that's a timeless classic. 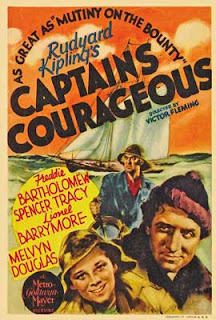 Posted by roncastillonyc@yahoo.com at 6:02 PM