This film has so many of the stylistic motifs of westerns that it feels like one. And maybe that's the point. That many of the elemental questions that adult westerns posit, like What's the role of the individual versus the needs of society? What does it mean to be 'civilized'?, And How does a man define his own sense of honor?...are all universal and still relevant today. A taut noir thriller filmed in color (a genre rarity), and set in a small Western town smack dab in the middle of a vast desert--think Nevada or interior California--opens with a one-armed stranger (Spencer Tracy) who's come to town to look for the father of an old Army buddy and finds out the man died mysteriously. The whole town wants to keep it a secret so they make the stranger's visit increasingly difficult. No, make that downright impossible. A nasty Rogue's Gallery of character actors make up the bad bunch that Tracy has to contend with, and eventually defeat. Ernest Borgnine, Lee Marvin, John Ericson, all led by the town's malevolent boss, Robert Ryan (one of the most underrated actors of his generation). Walter Brennan and Dean Jagger are also on hand as other townies to lend a sympathetic hand. But it's Tracy's evenhanded and measured performance you remember best. He makes it look all too easy. Look for the tight compositional direction John Sturges brings to heighten the tension. He gives the picture an almost graphic quality in his superb use of the widescreen Cinemascope vastness. The players are like chess pieces moving around a stylized desert chessboard. 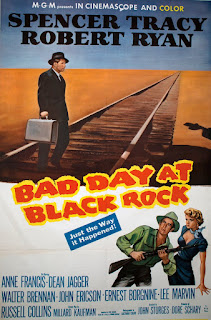 Posted by roncastillonyc@yahoo.com at 7:59 PM