Famed producer David O. Selznick wanted to make the definitive war picture about America's struggles on the Homefront, an answer to the highly successful "Mrs. Miniver" that illustrated the same theme for Britain (and bolstered national patriotism to boot). And even though we get a wide-ranging snapshot of what the country was dealing with, it's all told through the microcosm of one family. Claudette Colbert is the noble and selfless wife of an Army officer who's been shipped overseas. She's got two teenaged daughters (Jennifer Jones and Shirley Temple who Selznick wooed out of 'retirement') and has to contend with all manner of family dramas, the highs and lows. Adapted by the producer himself from an epistolary novel by Margaret Buell Wilder, the rambling plot bounces easily from laughs to tears to romance with each scene. Because times are tough, Colbert has to take in a boarder so Monty Woolley shows up for comic relief doing his patented grumpy fussbudget bit. Then there's Woolley's estranged grandson Robert Walker, a new recruit who falls for Jones. When Walker gets his assignment in the Pacific they have one of the most heartwrenching train station goodbye scenes ever filmed. You can feel Selznick trying to cram in every homefront touchstone into the script. There's Victory gardens, USO dances, scrap metal recycling, and Colbert even gets a job as a Rosie the Riveter in a munitions factory, but it all works because of the earnest efforts of the cast. What's most fascinating is director John Cromewell and ace cinematographer Lee Garmes choosing not to sentimentalize everything in a cozy glow, instead they opt for a moody almost noirish chiaroscuro lighting that hints at the darker realities of wartime living. There are some stunning visuals here amongst the quotidian doings. 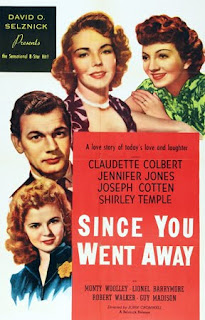 Posted by roncastillonyc@yahoo.com at 3:07 PM