An unparalleled triumph of style over substance. Some movies you watch for the deft plotting or the character development, some maybe for the crackling dialog. This movie has none of those things. What it does have is visual panache in spades. The unquestionable King of Cool in the 1960's was Steve McQueen. He attained that rare nexus that few actors achieve: men wanted to be him, women wanted to do him. Here, his aloof masculinity is put to perfect use as a millionaire financier whose hobby is masterminding perfect bank heists just for the thrill of it. He's pursued by an insurance investigator played by Faye Dunaway who was just cresting her own chic a la mode notoriety on the heels of her iconic role in "Bonnie and Clyde". Nothing really happens, the plot is just an excuse for these two beautiful specimens to traipse through a world of money, clothes, sports, cars, and architecture, it's a "Playboy" photo spread come to life. There's no better time capsule pictorial of what the American Male of the mid-century deemed desirable. And to add even more style to the proceedings, director Norman Jewison utilizes a multi-frame editorial device in key sequences to heighten the visual stimulus. Think of a Modrian painting populated with elegant eye candy pictures, all to the haunting strains of the movie's earworm love theme, "The Windmills of Your Mind". Oh, and don't forget one of the sexiest seduction scenes ever filmed where the leads do nothing but play...chess! Unforgettable sophistication. 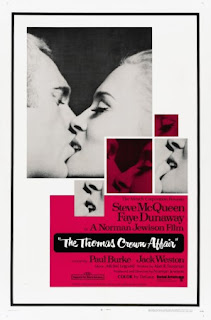 Posted by roncastillonyc@yahoo.com at 2:19 PM