Is it possible for a movie to be film noir and not be set in the dark alleys and shadowy streets of the city? If any movie successfully comes close to pulling it off then "The Red House" is it. Helmed by Delmer Daves (he would direct a fine noir the following year with Bogie and Bacall, "Dark Passage") this atomospheric mystery thriller takes place entirely in the bucolic world of a sleepy rural community. But with the angst and psychological feel of the noir genre. Kindly farmer Edward G. Robinson and his sister, Judith Anderson, have an adopted teenage daughter (Allene Roberts). She's got a crush on a local boy (Lon McCallister) who's the new hired hand. Trouble begins when the teens ignore the dire warnings of Robinson and start to venture off the farm and into the local woods, a place he has deemed strictly verboten because, well, there's a mysterious red house their where spooky unmentionable things once happened. Are you starting to catch all the not-so-subtle symbolism here? Forbidden places, burgeoning sexuality, coming of age, it's all here at a fever pitch. Throw another couple of naughty teens into the forrest, played by the unbelievably gorgeous Rory Calhoun and Julie London, who vie for our heroes' budding love and libidos, and you've got a steamy stew of secrets and young lust that would make Bruno Bettelheim blush. From Little Red Riding Hood to the Blair Witch, there's always a good scare to be had when you go deep into the woods. Follow this troupe and you won't be disappointed. 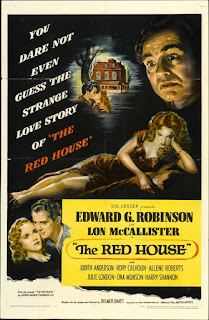 Posted by roncastillonyc@yahoo.com at 12:02 PM