One of the best movies ever made. Period. If you've never seen it, or don't know what's it's about, it begs the question, "What cultural rock have you been hiding under?" There's probably not much of value I can add here that hasn't already been said umpteen times (and probably better), about this unique film noir that breaks all the rules of the genre and, despite its being set firmly in the last mid-century still resonates for a current audience. The best films take on new and different shadings based on what life stage you view them. It's a simple story of a good looking young Hollywood screenwriter who becomes the kept man of an older, former silent movie screen star. There's much more, but that's the basic plot. As a young viewer, you see the woman (Gloria Swanson in an iconic performance for the ages), as a creepy monster clutching at the hunk (and boy, is William Holden a hunk). Years later, you realize he's the no-talent monster, preying on the generosity and fragile psyche of the lonely Swanson. And in 2016, the film plays as sad commentary on our obsessive  Culture of Youth, our fear of aging, and the societal stigma we (still) put on older woman/younger man relationships. Yes, it's takes a lot of shots at Hollywood, but that's an easy target. It's the larger themes that haunt all our minds and our "faces out there in the dark". This is cinema GOLD. Do yourself a favor, see it. 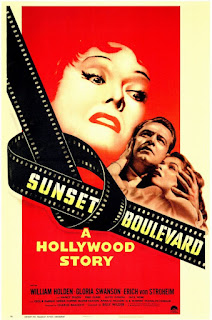 Posted by roncastillonyc@yahoo.com at 3:49 PM