Gingers Rogers had some pretty stiff competition the year she won the Academy Award for best actress in this sudsy melodrama...Joan Fontaine in "Rebecca", Bette Davis in "The Letter", and Katherine Hepburn in "The Philadelphia Story"...each of them powerhouse performances, all still memorable. Rogers' ace in the hole was that her natural and likable portrayal of a working girl torn between two lovers who each propose to her on the same night, came as a complete departure from all those lighter-than-air musicals she did with Fred Astaire. She get's to really act, but it's a sincere, self effacing performance. Told completely in flashbacks, we learn how she got in this enviable fix between the good looking and charming Main Line scion (Dennis Morgan), and the good looking and charming young doctor (James Craig). You can probably figure out the denouement ahead of time,  but it's fun waiting until the last line of the picture to really find out who she chooses. Just hang on for some gut wrenching waterworks along the way (I said it was a melodrama, didn't I?) And for all you trivia lovers, this is the movie that inspired the garment industry term "Kitty Foyle dress", a dark fabric shirtwaist frock with white collar designed by costumer Renié that Rogers wears, it was mass produced for years afterward. 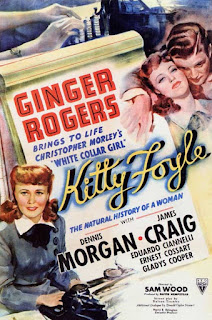 Posted by roncastillonyc@yahoo.com at 3:06 PM