It's hard to decide whether this this film version of Claire Booth Luce's hit Broadway comedy is a high camp classic where everyone involved is in on the joke, or a repulsive misogynistic time capsule relic that should be buried once and for all. Maybe it's both. There's no denying there are some reasons to give a look-see. Norma Shearer is the maddeningly goody-two-shoes wife who finds out her philandering husband is seeing a conniving shopgirl (Joan Crawford) on the side. Her gaggle of friends and family offer either support or behind her back gossip, depending on who's present. The twist in the telling is that the cast is all women, there's not a XY chromosome in the whole picture. But because the film's famous tagline is "It's all about men!", you can bet the only topics discussed are how to get and/or keep your better half. Let's just say this picture fails The Bechdel Test any way you look at it. The fast paced dialog is bitchy, twitchy and oh-so-quotable, it's supplied drag queens with material for over 70 years. Credit that most famous of all 'women's directors', George Cukor, for keeping all the comedic catfights and shoulder crying at a breathless pace. And there's no denying the whole flick is stolen by Rosalind Russell who reaches for the comedy brass ring (and succeeds) as Shearer's shallow backstabbing best friend. Her lethal gossip mongering, temper tantrums, and slapstick physicality are the very essence of what's horrid--and funny--about female friendships. To top it off you get MGM's in-house designer Adrian, outfitting all the actresses in crazy over the top 1930s Schiaparelli inspired fashions...there probably wasn't a bow, button, frill, or sequin left in Hollywood after they finished this one. There's even a "what just happened?" Technicolor fashion show sequence plopped right in the middle of the black and white story just for the hell of it, as if to say "we know damn well ain't no man in this theatre, so enjoy the eye candy, ladies." 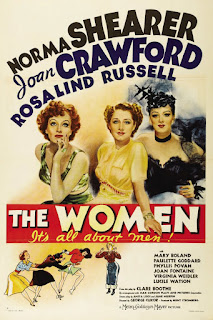 Posted by roncastillonyc@yahoo.com at 10:57 AM