A taut western thriller. Pursued by a posse, Glen Ford leads a band of escaped convicts over the Sierra Nevada mountains in the dead of winter. They happen on a tiny settlement on the other side occupied only by a group of women, their menfolk are all away prospecting for silver. There's beautiful Gene Tierney waiting for her fiancé, bedridden but feisty matriarch Ethel Barrymore, and a frustrated old maid Ann Dvorak among them. A group of lonely women, a group of pent up men, a remote setting...you can cut the sexual tension with a knife. Ford is really a good guy, he's only trying to find the man that lied on the stand at this trial, but galldarnit, turns out he's looking for Tierney's fiancé (while he's falling for her at the same time). The hissable Bad Guy in the bunch is Zachary Scott making a play for Dvorak...or is he merely using her to find a hidden cache of loot? When all these personalities clash, the story keeps ratcheting up to a big gunfight finale. A great cast and some fine scenery. If you love westerns do catch this overlooked gem, it's supposedly based on true legends of the Northern California setting. 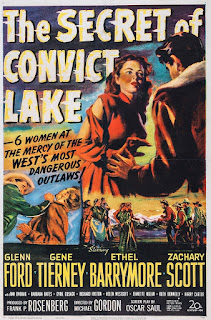 Posted by roncastillonyc@yahoo.com at 12:46 PM