If you had to describe to someone exactly what the wacky talent of famed musical director Busby Berkely was, you could show them this eye popping movie. It's a textbook example of his outlandish signature choreography, so over-the-top bizarro, you're still smiling while your jaw is dropping at the same time. Though Berkely didn't direct the whole picture--that credit goes to Lloyd Bacon--he did conceive and execute the three boffo musical numbers that finish the picture, essentially putting him on the Hollywood map as the master of Hollywood razzmatazz. James Cagney, in a role that could be Berkely himself, is the feisty empresario who creates live musical prologues for the big movie houses of the day (things were still in transition from Vaudeville). He's a manic genius who runs himself ragged coming up with more and more crazy numbers to top himself. He's so crazed for his craft that he overlooks the affections of his girl Friday, the always likable Everygirl Joan Blondell. Things race to the finale and those three musical set pieces ("Honeymoon Hotel", "By the Waterfall", and "Shanghai Lil") that have to be seen to be believed. All three are set to Tin Pan Alley tunes that bore into your brain like an earwig, just try and forget them the day after. With chorus girls and boys by the dozen, kaleidoscopic camera work, a water ballet that beats anything Esther Williams did by a decade, and some racy Pre-Code titillation, do yourself a favor and catch this one. 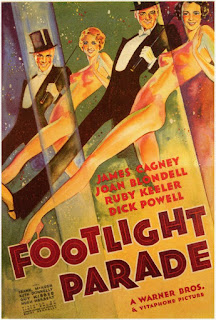 Posted by roncastillonyc@yahoo.com at 5:22 PM