A very fine political thriller that looks better and better with each passing year. Director Brian DePalma deftly weaves together a tight plot that references the Kennedy assassination, the Chappaquiddick scandal, and the Watergate coverup. John Travolta is a sound man for cheap grind house slasher pictures. One night he's recording sound effects and witnesses a car careen off a bridge into a river. The two passengers are a governor making a bid for the White House, and his 'date', Nancy Allen. Travolta to the rescue; the politician dies and she lives. That's just the beginning of the twisty plot as the two stars, both never better, find themselves embroiled in a conspiracy coverup because they're The Couple Who Knew Too Much. DePalma has such a command of the whiz bang cinema toys of split screens, cross-cutting, sound effects, deep focus, etc, that each tense set piece will make you giddy. As a wry comment on the proceedings expert cinematographer Vilmos Zsigmond bathes the whole production in inky blacks highlighted with reds, whites, and blues, an idea that sounds hokey but works in spades. Add Pino Dinaggio's heartbreaking and lush score and you've got a winner all around. Excellent movie craft becomes high art. 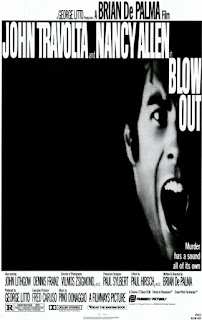 Posted by roncastillonyc@yahoo.com at 12:40 PM