Oh, the bittersweet tragedy of Mario Lanza. Nowadays merely a pop culture footnote, but for a brief few years in the middle 20th century he was as big as they come before his life was sadly cut short at only 38 years old. Blessed with chiseled Italian-American good looks and a thrilling tenor voice that could veer from Top 40 pablum to Puccini without breaking a sweat, his likable films brought accessible middle-brow culture to post-War America. Was he great actor? Not really. But my God, that Voice. This flimsily plotted musical is typical of his oeuvre. He's Pepe Duvalle, a rough 'n tumble creole fisherman in turn of the century Louisiana. When he's discovered by a New Orleans opera producer (the always game David Niven in a thankless role) slumming it in the backwoods bayous, it's a matter of time before he's the title overnight star. Along the way he flirts, bickers, and courts Niven's other protegé, pretty but snobby Kathryn Grayson. To hear these two duet, her lovely coloratura and his bell-clear tenor, in this film's huge hit "Be My Love" is thrilling movie heaven. Who cares if Sammy Cahn's wince inducing lyrics ("And hand in hand, we'll find love's Promised Land") are laugh-out-loud bad? These two sell it. Look for a very young Rita Moreno as a peasant ingenue who steals one of the big dance numbers, "Tina Lina". 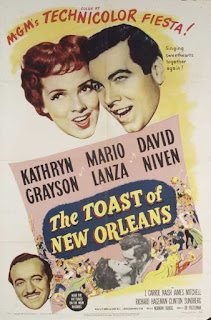 Posted by roncastillonyc@yahoo.com at 10:52 AM