A very fine and forgotten genre busting film. An adventure thriller, a quasi-western, and a Technicolor noir all rolled into one. Robert Ryan is a self-made millionaire who got there the hard way (and probably by bending the rules a little too). Before the credits finish rolling we learn that he's been left to die out in the desert mountains with a broken leg by his beautiful wife (Rhonda Fleming) and her lover, Ryan's business partner (William Lundigan). "It's not exactly murder if we just leave him there." What they don't count on is that Ryan is determined to survive this ordeal if it kills him. The whole film is a cross-cutting between the scheming couple, wringing their hands and dealing with the authorities who are starting to get suspicious, and Ryan keeping his wits and "MacGyvering" his way out of every scrap the unrelenting heat and landscape throw at him. What's fun is you get his voice-over commentary thoughts throughout, mostly about how he's gonna get revenge on those two who done him wrong. You don't really need it, but it gives Ryan double the acting challenge. The stunning Fleming and her mane of red hair are inferno enough, but add to it a gripping finale set amongst a blazing fire and the title more than pays off the whole filmic endeavor. Originally filmed for 3D, this must have been something, but it still plays well without a lot of hokey "Wax Museum" stuff thrown at the camera. Think of it as "Double Indemnity" in the Mojave. Solid entertainment. 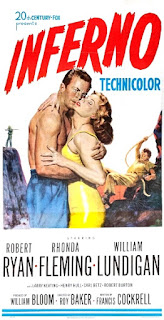 Posted by roncastillonyc@yahoo.com at 9:55 AM